A Montgomery County planning study looks at historical patterns of housing discrimination. The red areas signify areas and neighborhoods with past racial covenants, and the blue areas lacked such restrictions.

Article can also be found on Washington Business Journal‘s website.

Montgomery County planners have released the initial results of their Mapping Segregation Project, documenting evidence of past restrictive housing practices, mostly based on race, throughout the county’s southern portion, in hopes of better informing future land use policy.

The research was funded in 2020 “to determine whether a persistent pattern of economic inequality and segregation exists,” since the days when such segregation was legally sanctioned, according to a planning staff report from the time. Staffers briefed the county’s Planning Board on their first phase of findings as part of the board’s meeting last Thursday.

The research so far has focused on establishing a historical record of down-county housing discrimination — found to have been “pervasive and broadly supported in Montgomery County until well into the mid-20th century” — not on drawing actionable conclusions or policy recommendations.

Though, down the road, it could “potentially influence and shape” future efforts, such as county master planning, Jason Sartori, a planning division chief, told planning commissioners at their meeting last week. For instance, the Planning Board is in the early stages of revisiting the county’s 2000 Takoma Park Master Plan. Racial covenants in that city — which sits in the county’s southeast, bordering D.C. and Prince George’s County — concentrated Black homeowners in three particular neighborhoods, and county officials are evaluating how that has influenced current demographic patterns, and whether it should shape land use regulation today. 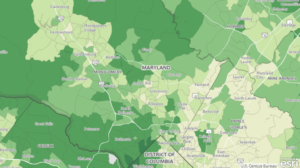 “Basically, you had to be a white, Anglo-Saxon Protestant, period, end of story,” she said.

The next iteration of the research, anticipated to be published in January or February, “can examine which racial disparities persist and which others are emergent in formerly racially exclusive areas,” last week’s staff report concludes. That “may yield additional insights into remedies for these communities that are burdened with inequitable access to housing and other accommodations today.”

Oftentimes, even if there aren’t overt laws that prohibit wealthy Black families from buying single-family homes in a given neighborhood with protectionist zoning measures, experts have raised concerns that its escalating price points over time still preclude a mix of housing types and homebuyers, narrowing its demographic mix — especially given an underlying, centuries-old racial wealth gap, both regionally and nationally. Studies have shown Black families have one-tenth the generational wealth of white families, while the St. Louis Fed found that gap for much of the past three decades to equate to 12 cents of Black wealth for every $1 of white wealth.

Piñero, who used to serve on the governing board of the Housing Opportunities Commission, a quasi-independent agency that administers federal housing programs, pointed to the utilization of federal housing vouchers as an example of how demographic sorting can still occur. While recipients could theoretically live anywhere, vouchers’ use in practice is largely limited to apartments whose rents lie beneath the voucher program’s rent ceilings. In Montgomery County, the majority of voucher holders go to “areas where there’s low-cost, multifamily developments,” namely, “Aspen Hill and Gaithersburg,” Piñero said. That observation resonates with the Washington Business Journal’s recent analysis of where the region’s lowest-income people can realistically live. We found far more prevalence of voucher utilization in the northern-central and eastern portions of the county than in the west.

“Why, in this county, [is it] so hard for a low-income person to find housing in Bethesda or Chevy Chase or Potomac or Kensington?” he said. “We’ve got to find ways that planning can contribute to lowering the barriers for people to find a decent place to live close to where they want to work and close to opportunities.”

While Piñero didn’t draw the connection explicitly, a disproportionate number of voucher users in Montgomery County are Black, at 74% of family members in voucher recipient households, versus 19% who are white, according to the HOC’s fiscal 2021 Annual Comprehensive Financial Report. And without changes in incentives or zoning to build higher-end, but affordable multifamily and associated amenities, those areas are more likely to see increasingly entrenched poverty and greater concentrations of people of color — an important conclusion from a recent study about housing production and displacement from the same county planning department.

The Mapping Segregation Project is part of the county planning department’s so-called Equity Agenda for Planning, a broader push “to systemically dismantle the institutional racism that exists in our work and prevent it in the future,” according to the department’s website.